Denim Disco
London, United Kingdom
DENIM DISCO is a blog dedicated to the pop music and culture of the 1970's. ~ Glam Pop and Discotheque Rock ~ The Sound Of The 70's ~ Contact:denimdisco@hotmail.co.uk 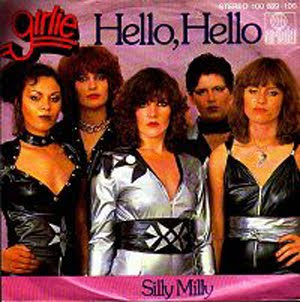 In 1979 Dutch all girl rock band GIRLIE released ''HELLO HELLO''as the follow up single
to ''ANDY {FOR LOVE IT TAKES TWO} '' which had been a hit in their homeland earlier
in the year.The single {which was co-written by Wally Tax of 60's NEDERBEAT icons THE
OUTSIDERS} contains a cutting edge feminist lyric and benefits from a tight group performance and a great ROCK GUITAR RIFF lifted from THE DOORS ''HELLO I LOVE YOU''.

Musically the record was one part ROCK and another part POP,mixing the POWER POP
of THE KNACK,the PURE POP of ABBA and some late GLAM ROCK era trimmings.
The single was released on the ARIOLA label and was backed by another strong song in the
form of the POP/ROCK/BOOGIE number ''SILLY MILLY''